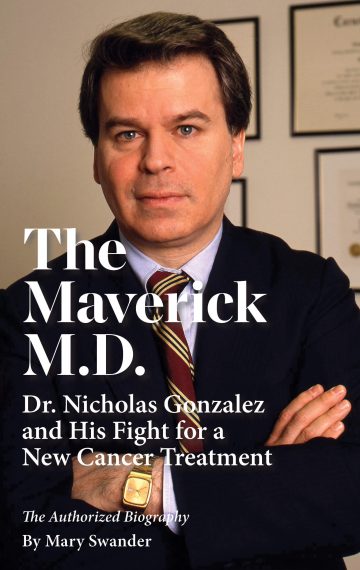 When Nick Gonzalez was a medical student, he stood beside his father’s deathbed and vowed that he would find a cure for cancer. Nick imagined his future as a researcher toiling away in a lab in Memorial Sloan Kettering, working on conventional approaches to the disease. Yet Gonzalez’s life was anything but conventional. At the urging of Linus Pauling, he had already left an accomplished journalism career and entered Cornell Medical School.

Gonzalez’s path took another turn when he met the controversial Dr. William Kelley, a dentist who, through an alternative nutritional approach, had arrested his own pancreatic cancer. Kelley had become infamous when he’d tried to help others.

The Maverick M.D. is the story of how Dr. Nick Gonzalez perfected the scientific theory behind Kelley’s work and put the protocol into practice in New York City. Gonzalez drew courage from his Christian faith, from his Mexican-Italian-American family, and from key loved ones, colleagues and mentors. He spent years treating patients with the most serious conditions–from cancer to diabetes to lupus. But he wasn’t satisfied as an outlier in the medical community. He wanted his work put to the test with a clinical trial.

This book portrays a man who fought for the acceptance of a nutritional cancer treatment in the halls of some of the most established U.S. medical institutions. Against intense opposition, Nick Gonzalez’s determination held up until the end–a scientist who developed a therapy that saves lives and promotes the healing of the human mind, body and spirit.

In addition to documenting Dr. Gonzalez’s life story, this book provides easy to understand explanations of The Gonzalez Protocol® and serves as an excellent overview for the layperson.