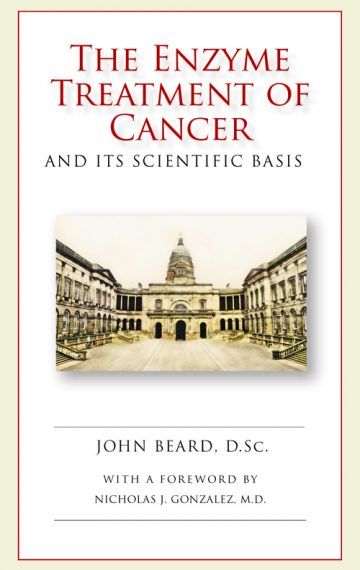 Collected papers dealing with the origin, nature, and scientific treatment of the natural phenomenon known as malignant disease

An Exact Reproduction of a Classic Work

In a 1902 article written for the British medical journal Lancet, the English scientist John Beard, at the time Professor at the University of Edinburgh, first proposed that the pancreatic enzyme trypsin represents the body’s primary defense against cancer and would be useful as a cancer treatment. Beard came to his conclusion as the result of some 20 years of hard laboratory research, that today holds up to rigorous scientific scrutiny. Despite his documentation and his impeccable reputation—he would be nominated for the Nobel Prize in 1905 for his work in embryology—the vast majority of cancer experts categorically rejected Beard’s thesis outright.

But not everyone dismissed Dr. Beard. A number of physicians concluded that Beard might be right, and with his support began employing injectable pancreatic enzymes in the treatment of their own patients diagnosed with advanced cancer, often with remarkable results as reported in the conventional scientific literature. These successes seemed to provoke an even more intense backlash against the treatment, in a heated debate that lasted right through the first decade of the 20th century. In response to his critics, in 1911 Beard published The Enzyme Treatment of Cancer and Its Scientific Basis, outlining his hypothesis, his decades of research and the promising and compelling results. Though released by a major London publisher to some very positive reviews, the book was soon forgotten as the scientific community and the media enthusiastically latched on to Madame Curie’s claim that radiation represented a simple, easy, non-toxic cure for cancer. It would be years before scientists realized radiation cured few cancers and was quite toxic—Madame Curie herself died as a result of her exposure to uranium—but by that time, Beard was dead and forgotten.

In 2010, 152 years since Beard’s birth, and nearly 100 years since publication of this book, it is time this pioneer’s work be reread. With billions and billions of dollars spent in recent decades on cancer research with only slight success to show for all the effort, Beard’s work warrants a thorough reconsideration.

It is intended for general informational purposes, not as a medical manual or a how-to book for self-treatment. Please consult with your physician before starting or modifying any treatment program. This book is currently out of print.

But for those who wish to understand the ins and outs of early cancer research, this book conveys a first-person narrative from a meticulous scientist who made some startlingly prescient observations about cancer. His, insights echo modern research: For example, scientists at Princeton are even now studying how metastasizing cancer uses enzymes and certain types of cellular signals to take root in bone. And researchers at Cold Spring Harbor Laboratory (CSHL) only recently discovered the stem cells that give rise to carcinoma — cells that Beard would have called ‘vagrant germ cells.’

AUTHOR BIO: John Beard was born in Lancashire, England in 1858, completed his secondary school education at Owens College in Manchester, and pursued undergraduate training in natural sciences at the University of London. He earned his doctoral degree at the University of Freiburg in Germany, concentrating on the development of sense organs in invertebrates and fish. Later, while affiliated with the University of Edinburgh, he first suggested that the early placenta represents an ideal model for the study of cancer, and that pancreatic proteolytic enzymes represent the body’s main defense against the disease. Despite the controversy his enzyme thesis created, in 1906 he was nominated for the Nobel Prize for his work in embryology. In 1911, he published The Enzyme Treatment of Cancer and Its Scientific Basis summarizing his thesis about cancer. Though in his lifetime the scientific community never embraced his ideas about cancer – he died in relative obscurity in 1924 – in recent years, evidence from molecular biology and stem cell research increasingly confirms many of Dr. Beard’s fundamental precepts.