Please be advised that due to damage from Hurricane Ian, all New Spring Press books (except The Gonzalez Protocol Cookbook) and all dvd purchases from this website are delayed while we await new inventory from the warehouse. You can purchase the digital downloads and receive them immediately. If you don't want to wait, click the links to purchase on Amazon.

New Spring Press Orders will ship out on December 26, 2022 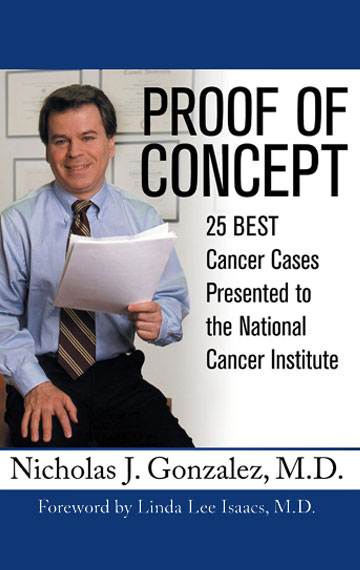 After just six years of practicing The Gonzalez Protocol®, a nutritional enzyme treatment for cancer, Nicholas Gonzalez, M.D. and his cancer patients experienced remarkable results. At this very early stage in his medical practice, Dr. Gonzalez was optimistic and believed that if he could prove that his protocol was effective for treating cancer, the NCI would support his nutritional cancer research. He complied his best cancer patient histories and presented his best 25 cancer patient cases to the National Cancer Institute (NCI) in 1993.

Proof of Concept demonstrates the importance of consistent good clinical outcomes of sufficient size. As Faiz Khan, M.D. remarks in the Preface, “this is all Gonzalez needed to show…and he did so beyond doubt.” As you will discover, there is no scientifically plausible explanation for this many cases of prolonged survival other than a treatment effect.

Dr. Gonzalez’s book introduction states: “The great majority of these people presented with poor prognosis or terminal disease, and for most I provide evidence for reduction of tumor mass. In several cases, I document unusual tumor stabilization for periods of years, though not outright regression of disease.”