You are here: Home / Library / Enzymes and Cancer 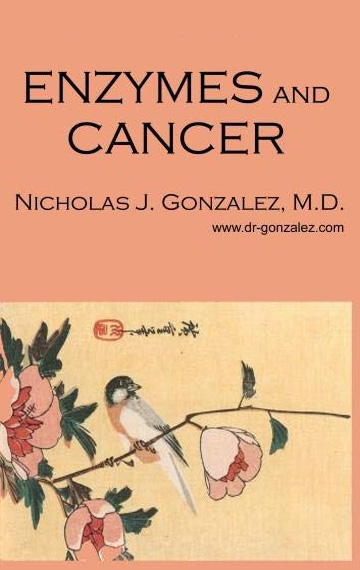 This lecture DVD was recorded at the Wise Traditions conference sponsored by the Weston A. Price Foundation. Watch as Dr. Nicholas Gonzalez discusses the history and scientific support for The Gonzalez Protocol® – his nutritional approach to cancer and other degenerative diseases. Dr. Gonzalez explains the history of the use of pancreatic proteolytic enzymes against cancer starting with the pioneering work of brilliant Scottish scientist, Dr. John Beard and the alternative practitioner, Dr. William Donald Kelley.

Dr. Beard proposed in 1906 that pancreatic proteolytic digestive enzymes represent the body’s main defense against cancer, and that enzyme therapy would be useful as a treatment for all types of cancer. He first suggested more than 100 years ago, to the great consternation of the medical world, that pancreatic proteolytic enzymes represent the body’s main defense against cancer and would be the ideal treatment of the disease. Particularly during the first two decades of the twentieth century, Dr. Beard’s thesis attracted some attention in academic circles, and several case reports in the medical literature documented tumor regression and even remission in terminal cancer patients treated with proteolytic enzymes.

For his cancer patients, as with all of his patients, Dr. Gonzalez utilizes diet and various nutrients, including the minerals, trace elements, vitamins and fatty acids to push their autonomic nervous system into equilibrium. Though autonomic balancing remains a crucial goal for Gonzalez’s cancer patients, as Dr. Kelley believed decades ago, it is not in and of itself sufficient to beat the disease once it has become firmly established. All Dr. Gonzalez’s cancer patients, regardless of their autonomic profile, also took, in addition to their other supplements, large quantities of orally ingested pancreatic enzymes derived from the pig pancreas, for a direct anti-cancer effect.

This lecture details how this specially formulated enzyme product remains the mainstay of Dr. Gonzalez’s cancer protocols, as it was for Dr. Kelley.